I installed WebSphere Portal express 6.1 on a Windows 2003 server in a demo environment and ran the config wizard to secure the server to an Active Directory running on a second server.

Adding an Active Directory user as a member of the preexisting "wpsadmins" group proved difficult and resulted in the "EJPAL3030E" error - most likely relating to a misconfigured group attribute.

As time was limited to complete the demo I simply logged into the Portal as the "wpsadmin" user, chose the AD user I wanted to promote to a Portal administrator and selected the icon to "duplicate role" of the wpsadmin user.

Now the AD user can see the "administration" tab in portal.

Looking through the LDD website can be a good use of time. There are plenty of tips to be found. Today I was looking through this section and found a presentation from Lotusphere 2008 on "Using NSD – A Practical Guide".

This was written by Elliott Harden and Joe Wallace.

The explanations seem pretty clear, while not suited for an absolute beginner, it is certainly a good starting point.

Semaphore debugging has never been so much fun.
Posted by jwylie at 3:27 pm No comments:

Since the upgrade to 8.10 of Ubuntu from 8.04 I found that the ATI Catalyst Control Centre (ccc) had been removed from the Applications menu.

Looking at Synaptic I saw that there was a package called fglrx-amdcccle already installed. This is the control Centre - it had just been missing from the menu. After a little hunting I determined the Control Centre could be invoked by running the command "amdccle".

To Simplify this a little I created a menu item for the "ccc" by right clicking on the "Applications" menu, selecting "Edit Menus" and then "New Item" - and filling out the details as shown below.

The is the app you need to control external monitors working with the T60p.
Posted by jwylie at 12:05 pm No comments:

Earlier this week there were a few updates for Ubuntu via Synaptic. As usual I let the system apply the updates in it's typical smooth manner, however this time there was a problem.

I booted back to the latest kernel. Running "fglrxinfo" in a terminal windows gave the error "BadRequest (invalid request code or no such operation)".

After a reboot the "fglrxinfo" gives a more useful output...

And now I have the cylinder effect going in conjunction with the cube. 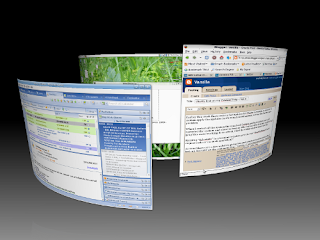 Thanks go to Alberto for EnvyNG yet again.
Posted by jwylie at 3:13 pm No comments:

Google predict the flu - what can they not do?

Google have done a little bit of work predicting your likelihood of catching the Flu if you live in the US. They have tracked search terms and found that queries on the Flu can allow them to predict outbreaks two weeks faster than existing systems.

In itself this is quite interesting - but what else could they track? Political affiliation in an upcoming election? Predict share price fluctuation in specific markets?

If I was a betting man I'd quite full access to their data - however I suppose google trends goes somewhere to this effect - however not with this granularity of geography.

Have a look here
Posted by jwylie at 11:59 am No comments:

As the latest release of Ubuntu has been out for a little while now – I decided to upgrade my laptop OS from 8.04 to 8.10. Ubuntu has the really nice facility of upgrading the OS in place – just by clicking the upgrade button. It was really nice to use when I upgraded from 7.10 on another PC. This time there was a problem.

There were various errors including “BADSIG 40976EAF437D05B5” and “Hash Sum mismatch” on the various Ubuntu repositories. I tried a number of fixes found via Google, mostly to no avail. Eventually I found an article in a forum pointing to a proxy server caching issue.

The fix that worked for me was as follows.

I added the following two lines...

to the file /etc/apt/apt.conf.d/10broken_proxy. This file did not previously exist on my system – but is referenced if it exists (as I found out due to a typo :-) ).

And separately did this....

My system could access the repositories perfectly. Finally I upgraded the system by running “Sudo do-release-upgrade -m desktop”.

All went well and now Ubuntu is running version 8.10.

Thanks to Asiyu on the Ubuntu forums
Posted by jwylie at 5:11 pm No comments:

I have had a quick read through of the, just published, Portal 6.1 tuning guide.

Generally I would describe it as a "mostly friendly" read.

I was pleased to see a section on "Recommended database maintenance for DB2". This is something that has been on my mind for a while - especially for SMB installations where true DB skills would be a "nice to have" resource. There is also a section on DB2 database tuning showing how the teams test setup was altered.

If you are interested in Portal 6.1 from a technical aspect - you really should read this.

jwylie
United Kingdom
This site is really useful for saving info I'll need later - mostly technical. Hopefully you will find it useful. Of course any actual opinions are all my own - not my employers.